a few degrees of separation

It’s hot – really hot – and it’s been hot for days. The heat makes me lethargic and i just lie around and chill and am not interested in eating. Right now, the Boss says that the air temperature is 31.0°C (87.8°F) with low humidity and a zephyr of a breeze. The temperature peaked at around 35°C earlier this week. But at least the Boss and i don’t live in either Melbourne or Adelaide, where the mercury hit 45.1°C yesterday, having peaked at 44.3°C on Thursday and 43.4°C on Wednesday. Now that’s unbearable heat.

In the yard, there are a number of different micro-climates where i can rest my lazy bones and dream of chicken necks, chasing balls and catching Frisbees. The favourite spot is on the tiles in the bathroom. They are cool – real cool, man. But the Boss doesn’t let me inside unless there is thunder or fireworks. So those cool tiles are out of bounds. Another of my favourite spots is at the top of the stairs near the gate. If there is a breeze, it will flow under the gate in the hole that some dog (before my time) created and cool me down. The Boss says that the temperature can be a few degrees cooler up here and is good during the heat of the day. 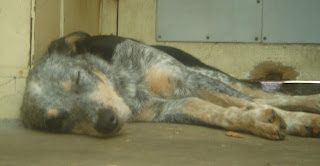 Later in the afternoon, as the air temperature cools down and the sun gets lower in the sky, this spot gets direct sun – so the temperature warms up again. There are other spots that i head to, in the shade, like under the garden seat where my head rests neatly on one of the cross-bars. Or slowly work my way down the stairs as the temperature changes each step down into the side of the hill.

When the Boss gets home from work, if it has been a really hot day, we go for a long walk to Mrs Macquarie’s Chair and I swim in Sydney Harbour to cool me down. Sometimes flip and his Boss comes with us, too.

If there are puddles around, they cool me down and i really love to lie in them. The Boss doesn’t worry too much about me lying in puddles – he reckons it’s a smart thing to do. And this is what separates us from the rest of pack – a few degrees!
Posted by caesar at 7:57 PM

I felt the heat too a couple of saturdays ago. Ugh. Me thinks Caesar needs to get boss to install airconditioning ;-)

Caesar is passionate about supporting this cause

caesar
G'day. thanks for pawing your way into my blog. i'm caesar. my boss tells everyone that i'm very smart and work obsessed. He also says i sometimes don't like intact male smaller dogs that have a strong tendency to want to stand over me. This is my second boss. I had two female bosses previously, And I miss them and thank them for my first life. i will do anything for a ball and return it to anyone who throws it. i produce lots of saliva on my balls. i don't like thunder or fireworks. i'm yet to work out the purpose of cats.